​FLR's main man Russell, notorious for discovering great female talent, met this unique talent during a chance meeting in Camden, London and signed her up to Future Legend in late 1996.  Misty Woods as she became known had good looks, star quality, songwriting ability and a great voice to match.

Fortunately for FLR she had been a fan of the label and found Eleanor Rigby an inspiration as a singer. This led to Misty not only covering a track written for Eleanor but never recorded: Wallpaper Man, but also to write a song of her own - Mod Boy.  Both of these were released as part of an Eleanor Rigby EP that featured two tracks by Eleanor: Love on The Phone and Play with Fire. 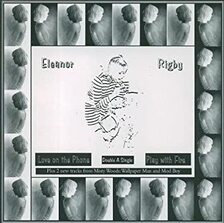 You can purchase the Misty Woods & Eleanor Rigby CD EP for only £5.00 (UK) or £7.00 (Outside UK) P&P free, by using
​the Paypal button below, selecting UK or Outside UK from the drop down list and clicking Add to Cart
​Misty got to hear Russell's band Box Office Poison's material at a time when the previous two singers Debbie Detroit and Jo Sharp had left. With an upcoming live TV performance due and no singer, Mouse had filled the breach as vocalist. Misty had been looking for something innovative and exciting to be involved in for quite a while and felt this music was perfect for her. Russell arranged recording sessions for the upcoming album Heavy Breathing Decade and Mouse and Misty covered all the tracks.
​
BOP also released two singles in 1997 and two tracks on Cult Themes from the Seventies. Misty quickly became the best exponent of the trademark atmospheric backing vocals pioneered on the first BOP album. These are heard to good effect on the themes The Persuaders and The Chase. On BOP single Think For Yourself/Lady Grinning Soul she was lead vocalist for both tracks and lead on Alien on the double A-side single Teenage Sex/Alien which was also released that year (Mouse's vocals were on Teenage Sex).
​Misty contributed the track 5-15 for Cult Themes from the 70's Vol. 1 . Once the famous footwear company Doc Martens heard the track they liked it and wanted it on their record label's debut release Generation to Generation. They liked Russell's production style also and asked him to find the acts, arrange and produce the album and get it manufactured.

BOP had previously done a cover of the classic song Louie Louie with Misty singing and this was voted best version out of  a wide range of versions of the song by listeners to the XFM radio show. After hearing BOP’s version of Louie Louie Doc Martens wanted the track on their album and also wanted to sign the band to their label and put a big promotional push behind it. Unfortunately an internal reshuffle at the company meant the Doc Martens record label was later scrapped and the offer of the signing came to naught.
​
By the end of 1997 people were talking of Misty as being in the same league as Eleanor Rigby. Mouse stepped out of the band around this time and Misty took over as lead singer. 1998 was a less hectic year but nevertheless an important one for Misty and BOP as it saw the release of BOP's controversial second album Heavy Breathing Decade where Misty sung lead on 9 of the 15 tracks. This album contained some of Misty's finest vocals. The breathless I Want You All The Time and Don’t Sleep With Him are stand out tracks.
There seemed to be major artistic chemistry at work when Russell & Misty worked together and although there have been a number of people pass through the BOP ranks the Russell/Misty combination defines what BOP and the Pop Noir genre of music was all about. It was probably the most definitive BOP line up.  1999 saw Misty and Russell at their creative best when recording tracks for Cult Themes from the 70’s Vol. 2.  BOP contributed a sexy, raunchy version of The Deep sung by Misty. Their versions of the Persuaders theme & Maddalena also defined the Pop Noir music sound and feel. Individually their fingerprints were all over this album. Russell produced it. Misty did a great rendition of the Kinks masterpiece The Way Love Used To Be (taken from the film Percy). Not only did Kinks fans love it but the press said that this track was like a lost Kate Bush classic and an outstanding track amongst many on this release. 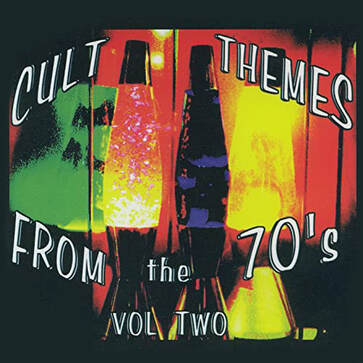 cult themes from the 70s Vol 2
​At this time Misty had formed another band, Digital Lemon, and their version of A Clockwork Orange for the Cult Themes album was an electronic masterpiece, helping to kick start the new Electronica movement that she was later to play a major part in.

During 1999 Misty formed a short lived new band called Molotova with keyboard player Yannick Muet (aka Yan Des Astres). Molotova released a single album, Warm Up, and a mini EP Don't Let The Mind Man Come in 1999, and played live in 2000 at the In The City festival. Also during that time Woods worked with Ed Ball, guitarist, singer and founding member of the Television Personalities and The Times. The collaboration resulted in an album release, Pirate Playlist 66 (Creation, 1999).
After Molotova split up Misty joined up with London-based DJ Stix to form the electrotrash band The Ju Ju Babies. 2001 saw her final recordings on FLR with This is not America (Misty solo), Merry Christmas Mr. Lawrence and Blade Runner (BOP tracks) for the Cult Themes from the '80s album. This album also featured her singing on bonus track Pop Noir's Alien, a cover of the single from BOP's first album Beyond the Twilight Zone. Late 2001 saw Misty perform live with Russell for the last time as Box Office Poison, headlining the Cult Themes From the '80s launch concert at The Subterranea in Notting Hill, London, alongside amongst others, Blondie tribute act Once More Into The Bleach, Phosphoric, A Girl Called Max and The Incredibly Strange Film Band. This was also the stage debut of Misty's new band The Ju Ju Babies.
​Her contract to FLR having expired and Misty keen to expand her horizons, in 2004 The Ju Ju Babies became an in-house band in Ibiza performing their brand of electrotrash at Manumission club night at Privilege, the world's largest nightclub @ 10,000 capacity. They were also the first band to perform at Ibiza Rocks, which they did for a period of 4 months in 2004. Following the Manumission residency, the Ju Ju Babies split, but Woods continued to perform at the club night. The band released a single four-track EP Electrotrash on punk label No Head Required, 2003.
​In 2006, Misty joined with The Grid members Richard Norris and Dave Ball (of Soft Cell fame) to form Misty Woods & GDM. They did not release any recorded material, but played a number of major shows, most notably an appearance at the 2006 Whitby Gothic Weekend. Misty also guested with mod band The Times (Ed Ball) in live gigs around this time. 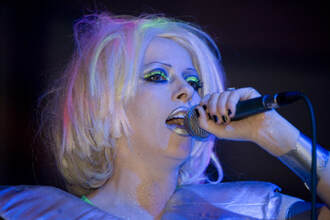 Live performance at Whitby Gothic weekend
Misty then collaborated with The God of Hellfire himself Arthur Brown, covering All Living Fear tracks Widow's Blame and What If? for the All Living Fear double compilation album Fifteen Years After (Dangernoise Nov 2007).  A track called Head Surfing, a collaboration between Misty and Warboy, was included on Some Bizarre Record label's The Only Failure Is To Cease To Try  2008 double album, a mix of new and upcoming electronic music.
​
In mid-2008, Misty co-wrote film scores with Psychobilly electrotrashers The Nitewreckers (featuring Dave Ball) for major Hollywood film company Universal and recorded a track with The Nitewreckers for a forthcoming Hollywood film Letters.
The latest release for Misty on FLR was The Best of Misty Woods download album which contains all 21 of her tracks, including four tracks of previously unreleased material. 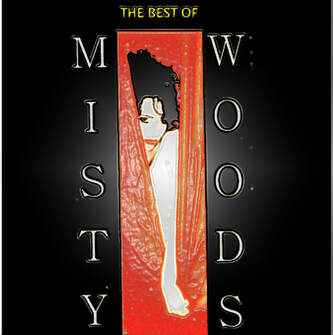 The Best of Misty Woods
Track Listing
To obtain this album please use the iTunes or Amazon buttons below or go to your favourite download site.
iTunes
Amazon
MISTY WOODS DISCOGRAPHY
SPECIAL MISTY WOODS PACK
​Please select from the dropdown list below and click Add to Cart.
home
​To contact us please email futurelegend2000@yahoo.co.uk