The Andersons Are Go! (A tribute to Gerry & Sylvia Anderson) is proving to be popular with the fans of many of their amazing futuristic TV series.  Although they produced some later cult TV series using human actors (including Space 1999 and UFO), the Andersons were most famous for the Supermarionation (animated talking puppet) technique which was used to create the characters in Stingray, Captain Scarlet, Joe 90, Thunderbirds and more. The imaginative concepts, pioneering production techniques, ambitious scale and plentiful explosions gave the shows a universal appeal to children and adults alike. 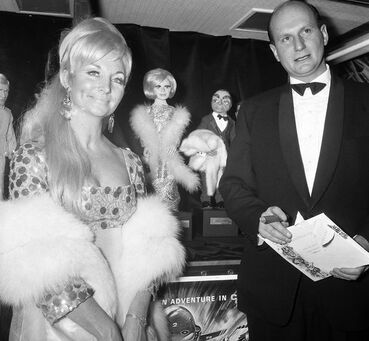 Gerry and Sylvia Anderson with the Lady Penelope and Parker puppets from Thunderbirds
Lady Penelope was an upper class lady character who was the Thunderbird team's secret agent. She played a leading role in many of the episodes and was an incredibly popular character. The majority of the Anderson shows had female characters in the cast, although not many of them stepped out of the female stereotypes prevalent of the times. In Fireball XL5 Dr Venus was the female lead, in Stingray the ladies were Atlanta and Marina, and in Thunderbirds it was Lady Penelope and Tin-Tin. Although Dr Venus was a specialist space doctor, Lady Penelope was the only female character in these series who wasn't playing the standard female 'nuturing' role but instead was something deliciously exciting and novel.

Sylvia Anderson was an attractive blonde lady with a lot of style. The puppet designer for the Thunderbirds puppets used Sylvia as the template for Lady Penelope without her being aware of it. Sylvia was also the template for the Dr Venus puppet in Fireball XL5. The designer said "We needed a glamorous blonde and [Sylvia Anderson] was the obvious choice". 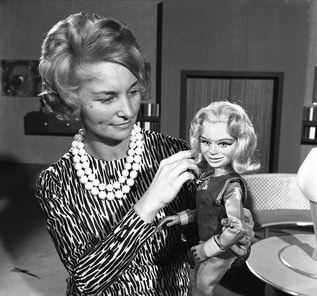 Sylvia Anderson with the puppet model of Dr Venus from Fireball XL5
The Andersons started way back in 1957 with a number of childrens' series using puppet figures - The Adventures of Twizzle, Torchy the Battery Boy, Four Feather Falls, Supercar and Fireball XL5. We have not done covers of the theme tunes for all of those early series (not all of them are suitable) but we have covered some of the later themes: Stingray, Captain Scarlet, Joe 90, Space 1999, UFO and Thunderbirds on this tribute album.

​We have since produced two further Anderson themes, Fireball XL5  & Aqua Marina, and these appear on the Cult Themes Forever album (on CD format and  download - see further down the page for more details).
When fans asked us to collate the themes from the Anderson shows that FLR had already released on the Cult Themes albums we decided it was a great idea. It also tied in with the tribute that we wanted to make to Gerry and Sylvia Anderson, who worked so hard for many years to bring pleasure to children and adults worldwide with their forward thinking, innovative techniques  and stylish creativity.
The Andersons Are Go! Tracklisting
The Andersons divorced in 1980 yet both continued their separate careers in the creative arts of film and TV production. Sylvia also wrote several books. Gerry worked on numerous other projects, including the Terrahawks TV series which ran to 39 episodes. Gerry passed away in 2012 and Sylvia in 2016, each of them being a great loss to the world. We salute and thank them both!
The Andersons Are Go! album is downloadable from iTunes, Amazon and many other download sites. To find the album on Amazon or iTunes and listen to samples or make a purchase please use the buttons below.
Anderson tribute Amazon
anderson tribute itunes
If you want to get the two extra themes of Fireball XL5 and Aqua Marina you can download them from iTunes or Amazon using the buttons below...
Cult themes forever amazon
cult themes forever itunes
...or you can order the whole Cult Themes Forever CD (from £4.99 P&P free) directly from us using the Paypal button below - just select UK or Outside UK from dropdown list and click Buy Now.

​Breaking News for Anderson Fans!
We have a little extra info for the fans of Anderson cult TV. The Firestorm series was originally developed by Gerry Anderson in 2001 with his then business partner John Needham. Purchased by a Japanese company, they tried to make it into a part puppet, part anime series, but although it heralded to be successful given Gerry's past experience and creativity, there were many problems during the making of it. The Japanese production team were unwilling to accept Gerry's input and in addition there were numerous budgetary constraints. The resulting anime series failed and was mocked by fans as a half and half effort.

After his passing the project was revived by his son Jamie Anderson, funded with crowdfunding in 2014 and created using the new technique of Ultramarionation (a blend of rod-controlled Supermarionation puppets and CGI). Many industry professionals worked on the project in between their other work commitments, including a number of people who had previously worked with Gerry on his other TV and film projects. The first mini episode premiered in 2018 and was called Gerry Anderson's Firestorm.

It just goes to show how well respected Gerry Anderson was and how his work had such a powerful influence on people all over the world across at least 3 generations, with his many series becoming cult TV that nobody would ever forget.

The first mini episode/trailer for Firestorm can be viewed below and it's terrific. The Anderson legacy clearly continues.
home
If you need to contact us please email futurelegend2000@yahoo.co.uk