Described as a cross between The Kinks, Blondie and The Jam at their best on her arrival on the pop scene in 1985, she influenced many of female singers of the next generation. When Britpop appeared in the mid 90's she was regularly name checked by many of the major Britpop artists of the time. She was ahead of the game, but if you want to catch up with her career and to find out the full story then read on...

Eleanor's career was short yet controversial and mysterious and this, along with the quality and limited quantity of her releases has led to her becoming a cult figure on the collector's market. Her total original output was only 4 singles and the album Censorship, which now changes hands for big money.
After further controversial press where Eleanor turned down half a million pounds to pose nude for a Japanese porn magazine, she released her one and only album Censorship which came complete with a very tasteful nude poster, more reminiscent of Marilyn Monroe's calendar shots than Madonna's full frontals. The Censorship vinyl album has changed hands for up to £100 on the collectors market and is often described as a Mod classic that sits nicely next to classic '60s releases or '90s Britpop albums.
Three years after her splash onto the world of pop she was selling out 3,000 capacity venues and being courted by a number of major record companies, some offering serious money. But with the world at her feet she suddenly resigned and disappeared. Nobody really knows why or where she went.
​A special limited edition CD album Eleanor Rigby Live (below left) has more recently been released containing recordings of selected tracks from her live performances. She was a huge live draw - even outselling big artists like James Brown and Joe Cocker who on one occasion played dates before and after of one of her concerts in Hamburg.

As a mod singer of some repute she was asked to be one of the lead vocalists on Spectrum's Mod Aid single All Or Nothing. This single also featured mod legends Steve Marriott of the Small Faces, Chris Farlow & P.P. Arnold. Below (centre) is a rare photo of her in the studio recording the song. The Mod Aid single is very rare and when we last looked only used copies could be found online (below right).
Eleanor left the music scene and has, not, to our knowledge, recorded anything since. When an artist dies or disappears this is one reason they reach cult status and this seems to be where Eleanor is currently lodged in the scheme of things. She could have been the Queen of Britpop had she only stuck it out. Why she disappeared is still a mystery, but despite that her independent and gutsy attitude went on to influence a host of Britpop acts including Blur, Oasis, St Etienne, Garbage, Sleeper and many more.
The Best Of Eleanor Rigby album sold consistently well. It was eventually deleted when the last pressing ran out. 20 years later a new limited edition entitled The Best of Eleanor Rigby Vol. 1 was released to mark the 20th anniversary of the original album. If you want to get hold of a copy, please use the Paypal button just below, select your location (UK or Outside UK) from the dropdown list and click Add To Cart.
​The Best of Eleanor Rigby Vol 1
20th Anniversary Limited Edition 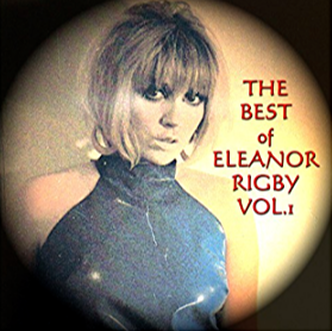 What ​Eleanor Rigby vinyl and CD singles are still available?
Only two 7" vinyl Eleanor Rigby singles remain available: Take Another Shot Of My Heart on the original Waterloo Sunset Label (this single is very collectable) and Love on the Phone/Play with Fire, her last ever 7" single, which also has a CD version with a slightly different cover (far right). The CD version has two bonus tracks of Wallpaper Man and Mod Boy by Misty Woods.
If you want to get any of the Eleanor Rigby releases mentioned above please select from the dropdown list below
and click the Add to Cart button.
ELEANOR RIGBY DISCOGRAPHY
Below is a discography of all the different releases Eleanor has been on, including those on other record labels. It tells you the title, what label it is on and whether or not the release is still available. In most cases, where the physical format has sold out, the music is still available on download. The only time this may not be the case is if the tracks were licenced for use on a compilation by another record label. (FLR almost always has an option for fans to purchase those tracks by download though).

Key:  WS = Waterloo Sunset Records,  FLR = Future Legend Records, DO = Download only
For purchases, please select from the dropdown list below
and click the Add to Cart button.
HOME
To contact us please email: futurelegend2000@yahoo.co.uk