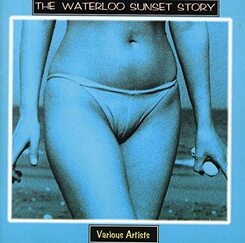 THE WATERLOO SUNSET STORY HISTORY
Waterloo Sunset Records was a small indie label from the 80's well known to fans of Mod music. Cult Mod artist Eleanor Rigby’s original releases came out on the Waterloo Sunset Label and not only has her material become very collectable but so has anything on the label, which continued to release vinyl format at a time when vinyl records were rapidly being supplanted by CD.  The label remained faithful to both fans and professionals who liked to have and hold vinyl and who preferred the warmer sound of vinyl over the more clinical sound of the compact disc.

Waterloo Sunsets total output was six 7” singles, three vinyl albums and one cassette album. We have now combined the best of these tracks with further unreleased material and mixes to create this compilation album.

Several thing make this album particularly worthwhile. It contains a value for money 22 tracks, including the rarely available acoustic version of the title track of Eleanor Rigby's Censorship album, a rare live track of Where Have All The Good Times Gone, a 12” full version of See My Friend, an alternative 'sleaze' mix of her single Last Night In Soho, Make Up Your Mind by Mod band The Reaction and The Honeydripper by A Beatboy. The latter two tracks are very collectable and sought after, and this album is the best way to hear these tracks as the 7” singles are very hard to get hold of.

After Eleanor left the scene Waterloo Sunset employed a replacement band named The Psychomatics to play her material live. They also re-recorded some Eleanor Rigby tracks that were ultimately never released, but they were so good we couldn't leave them off this album. Check out their pacy versions of Teenage Sex, Gotta Move and 1995.

The 12 page CD booklet contains exclusive photos, the interesting story of the label and a collectors price guide. The CD has been sold out for some time but the album may be made available on download. We will keep you informed.
The Waterloo Sunset Story Track Listing
Home
To contact us email futurelegend2000@yahoo.co.uk