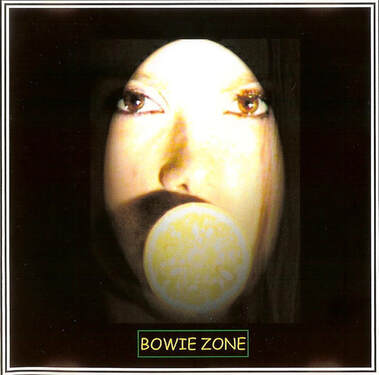 ​Bowie Zone is a download release or on-demand CD EP of 4 cover versions of some of our favourite Bowie tracks, 3 of them being cult film themes.

FLR's producer Russell once shared the same New York management as David Bowie and Russell bumped into the great man after a management meeting in the US. The two ex-Brixton boys hit it off and compared notes over coffee. Bowie said he loved both of Russell’s productions of his tracks Lady Grinning Soul and the Cat People theme.
​
The Cat People theme (Putting Out Fire) covered here by Phosphoric is one of the best cult themes in our opinion. Very pop noir, with plenty of weird instrumentation and a very menacing feel. Puts the hair up on your arms. Absolutely superb.

Box Office Poison (with Misty Woods as lead vocalist) has made an unusual sexy version of this deliciously piano-led track Lady Grinning Soul.

The Blondie tribute band Once More Into the Bleach do a haunting yet poppy cover of Absolute Beginners, and last but not least Misty Woods does a great job on her cover of the lesser known This Is Not America, singing in her distinctive, breathless style.
A little bit of background for you...
Cat People (Putting Out Fire) was the title track of an erotic horror movie released in 1982 that acquired cult status among its fans. The single was a commercial success, getting to the top of the charts in multiple countries. It's considered to be one of Bowie's best recordings.

The original Lady Grinning Soul that Bowie was singing about was Claudia Lennear. She had a fabulous, powerful voice and was very sexy with a beaming smile. She was one of the famous Ikettes, the backing singers for Ike and Tina Turner, and later did backing singing for Eric Clapton, George Harrison, Bob Dylan and a huge number of other famous artists throughout her musical career. She also had a solo career and released an album of her own. Mick Jagger dated her at one point and was said to have written Brown Sugar about her.

The Bowie track This Is Not America was the final credits theme for the cult film The Falcon and the Snowman, a film based on the true story of two espionage agents selling secrets to the Soviets. The Bowie song reached #1 in the charts in both The Netherlands and Poland, and #2 in Belgium.
Lady Grinning Soul by Box Office Poison first featured on the band's EP CD single Think for Yourself along with the bonus tracks Louie Louie (voted best version by listeners of radio station XFM) & Nightmare on Elm Street (an original horror track written by the band for use in the 6th Nightmare on Elm Street film). If you want to get Lady Grinning Soul on the Think for Yourself CD direct from Future Legend Records you can get it on the Box Office Poison page, where you will find a Paypal purchase button. You can also check out a video of Lady Grinning Soul on that page.